Kings Of Harlem at M Ensemble

and Sunday in the Park with George at Zoetic Stage

Kings of Harlem, an exuberant play about an African-American basketball team in the 1930s and Sunday in the Park with George, Stephen Sondheim’s intricate musical about painter George Seurat, took their respective places in South Florida theatrical history as Best Play and Best Musical on Monday, April 2, when the winners of the 42nd annual Carbonell Awards were announced. The ceremony was held at Broward Center for the Performing Arts in Fort Lauderdale.

M Ensemble in Miami scored big with Kings of Harlem, which earned four awards, the most of any production.  In addition to Best Production of a Play, Kings of Harlem playwright Layon Gray also won Best Director, Play; Andre L. Gainey won Best Supporting Actor, Play, for his heartfelt performance as an older basketball player; and the show also won the Best Ensemble award.  M Ensemble’s fifth Carbonell Award went to Carolyn Johnson for her feisty performance in Flyin’ West.

Kings of Harlem was a milestone of sorts for M Ensemble, the oldest African-American theater in Florida.  Founded in 1971, M Ensemble has produced in many theaters; Kings of Harlem was the first in the company’s new space at the Sandrell Rivers Theater, a large black box that was transformed into a basketball court for that show.

Another Miami theater, Zoetic Stage, scored big with six Carbonell Awards. In addition to winning Best Production of a Musical, Angelina Esposito won Best Costume Design for her work on Sunday in the Park with George.  David Kwiat was named Best Actor, Play, and Michael McClain won Best Scenic Design, both for their work on The Caretaker.  Zoetic Stage’s sixth Carbonell Award went to Anton Church for Best Sound Design for ¡FUÁCATA!, or a Latina’s Guide to the Universe.

Sondheim has been very good to Zoetic Stage—the company has produced three musicals and all have been by Sondheim.  Last year, Zoetic Stage’s production of Passion earned three Carbonell Awards; their 2014 production of Assassins won Best Musical.

The winners of the Best Play and Best Musical honors are proof that the Carbonell judges have long memories.  Both Kings of Harlem at M Ensemble and Sunday in the Park with George at Zoetic Stage opened in January of 2017, the first month of the Carbonell Awards eligibility period, which runs the calendar year.  In fact, Kings of Harlem was only the second eligible show in the Carbonell Awards 2017 season—it opened January 5—while Sunday in the Park with George opened January 20.  In all, there were 98 Carbonell Award-eligible productions across the tri-county region in 2017.

With those two Miami theaters winning more than half of the 20 Carbonell Awards of the evening, the other nine awards were spread among theaters in Broward and Palm Beach counties.

Miami-Dade County scored highest among the three counties in the South Florida region covered by the Carbonell Awards. Two Miami-Dade County theaters won 11 out of 20 awards, while four theaters Broward County won six awards and three theaters in Palm Beach County won four awards.  Even though the breakdown among the counties was different in 2016, for the 2017 season the awards were still distributed among 12 productions at nine theaters. 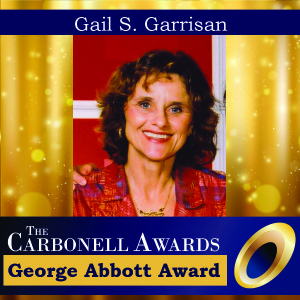 The prestigious George Abbott Award for Outstanding Achievement in the Arts, awarded to an individual (or team) who has contributed significantly to the artistic and cultural development of the region, was presented to Gail Garrisan, the founding artistic director of City Theatre’s Summer Shorts festival, and a director and teacher whose work has impacted the lives of hundreds of thousands of theater professionals, students and audience members since she began her South Florida career in the early 1990s. 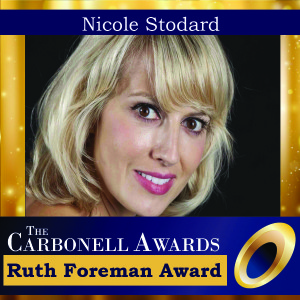 The Ruth Foreman Award, named in honor of pioneer theater director and producer Ruth Foreman, to recognize contributions to South Florida theater development by an individual or group, for singular achievement and/or career contributions, was awarded to Nicole Stodard, founder of Thinking Cap Theatre in Fort Lauderdale, for her year-long GAP Play Reading Series, which presented a staged reading of each of the 12 Pulitzer Prize-winning plays written by women, along with talkbacks that raised awareness of gender bias. 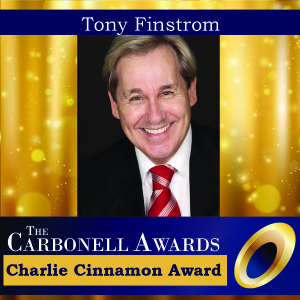 The Charlie Cinnamon Award, created last year to honor an individual who not only contributes significantly to the support of the arts in South Florida, but also for dedicated service to the Carbonell Awards organization, was awarded to playwright Tony Finstrom, for his tireless support and promotion of South Florida theater, through his aggregation and distribution of theater news, his dedicated service as a Carbonell Awards judge, his work with the Jan McArt Play Reading Series at Lynn University, and for establishing the Silver Palm Awards, which last year celebrated its 10th anniversary of awarding excellence in South Florida theater in a non-competitive manner. 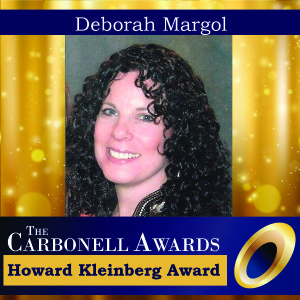 The Howard Kleinberg Award, created as special recognition for contributions to the health and development of the arts in South Florida, was awarded to Deborah Margol, who served the Miami-Dade County Department of Cultural Affairs for 32 years and retired in February as deputy director of that department.  Margol is credited with being directly responsible for the department’s growth and success over the past three decades, distinguishing herself through her passion for the arts and insightful, creative and strategic contributions to both the department and the arts community. 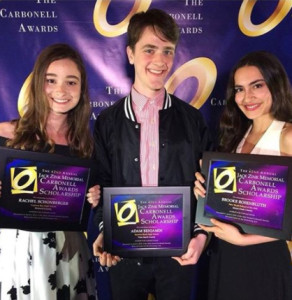 In addition to recognizing the stars of today, the Carbonell Awards’ mission has always been to award scholarships to the talent of tomorrow in the fields of theater and journalism. The Jack Zink Memorial Carbonell Awards Scholarships awarded a total of $6,000 in scholarships to three high school seniors, one from each county, who were selected after a rigorous, merit-based selection process.  The scholarships were awarded to Rachel Schonberger (Broward County) who attends Cypress Bay High School in Weston and will continue her education at Northwestern University’s Medill School of Journalism in Illinois; Brooke Rosenbluth (Miami-Dade County) who attends New World School of the Arts, and plans to pursue a degree in theater; and Adam Benjamin (Palm Beach County) who attends Boynton Beach High School and will major in theatre and math at Case Western Reserve University in Ohio.

In response to the tragedy at Marjory Stoneman Douglas High School last month, two drama students, Sawyer Garrity and Andrea Pena, wrote the song “Shine,” which deals with triumphing over adversity. The song was released on iTunes and proceeds will go to a nonprofit organization called #ShineMSD, to help students by healing through the arts. The Carbonell Awards Board of Directors  invited the students to perform at the 42nd Annual Carbonell Awards Ceremony, as they exemplify the mission of the Carbonell Awards: honoring the creative artists of today and tomorrow. 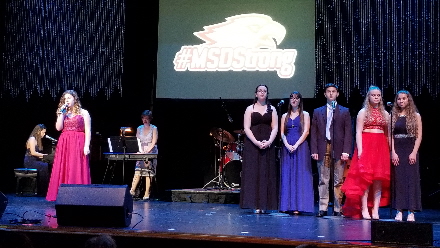 The Carbonell Awards, a not-for-profit organization, is funded by tax-deductible donations and award sponsorships.  The generosity of this year’s sponsors shows a growing commitment from the community to the Carbonell Awards and their mission to advance theater in South Florida.

The Carbonell Awards fosters the artistic growth of professional theater in South Florida by celebrating the diversity of our theater artists, providing educational scholarships, and building audience appreciation and civic pride by highlighting achievements of our theater community. More than 25 professional theater companies in Broward, Miami-Dade and Palm Beach counties participate in the awards process every year. Each season volunteer panelists and judges choose nominees and recipients from nearly 100 shows produced on our area stages. The Carbonell Awards also celebrate the accomplishments of our artistic leaders by presenting ‘Special Awards’ and support the next generation of artists and journalists by awarding scholarships. Along with New York’s Drama Desk and Chicago’s Joseph Jefferson Awards, the Carbonell Awards are among the nation’s senior regional arts awards and predate others, including Washington, D.C.’s Helen Hayes Awards. The Carbonell Awards are named after Manuel Carbonell, an internationally-renowned sculptor, who designed the original solid bronze and marble award in 1976, the signature trophy that is given to Carbonell Award winners.

Below is a complete list of this year’s Carbonell Award winners, followed by a breakdown of the awards by county, theater and production.

Best Production of a Play  Kings of Harlem, M Ensemble

Best Production of a Musical  Sunday in the Park with George, Zoetic Stage 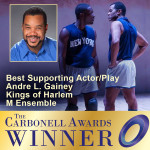 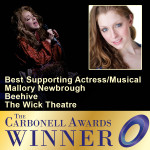 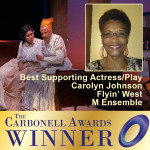 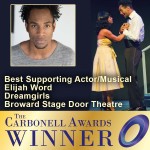 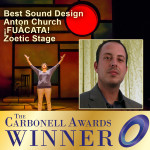 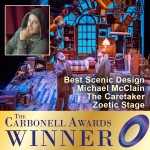 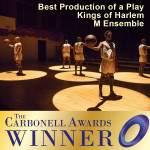 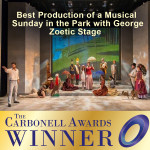 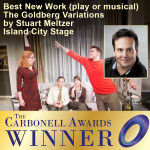 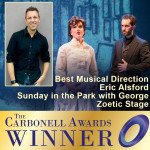 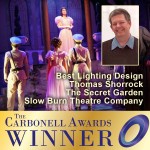 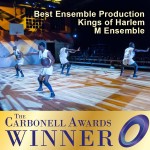 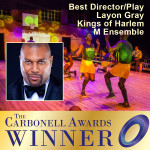 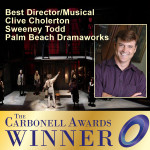 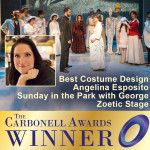 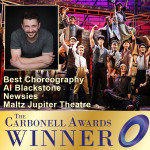 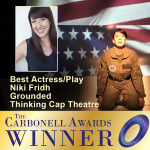 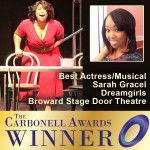 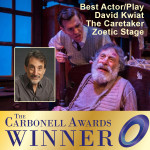 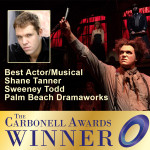