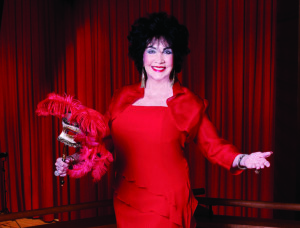 For more than 25 years, she ran the Royal Palm Dinner Theatre in Royal Palm Place which, according to an article last year in Boca Magazine, “included three separate companies—the main dinner theater; the 100-seat Rooftop Cabaret Theatre, which brought in vocal talents from prominent supper clubs; and the Little Palm Children’s Theatre, which hosted family productions on Saturday mornings. Its alumni include Frankie and Ariana Grande. McArt would go on to “break” performers like then 17-year-old Rachel Bay Jones—star of Royal Palm’s first Gigi—who would go on to win a Tony Award for Broadway’s “Dear Evan Hansen” in 2017.”

She also started theatres in Fort Lauderdale, Delray Beach, Key West and Miami Beach, and produced many shows through her not-for-profit wing, Jan McArt’s American Festival Series. In addition, she simultaneously produced three national touring companies of The Pirates of Penzance; in 1989 she brought an original musical, The Prince of Central Park, to the Belasco Theatre on Broadway.

McArt had an exciting and wide-ranging career from opera, Broadway and the concert stage to award-winning television performances and highly acclaimed supper club appearances, both nationally and abroad. She was a leading soprano with the San Francisco Opera Company and the NBC Opera Company and starred in world premieres in New York.

Having made her symphony debut with Arthur Fiedler and the Boston Pops, the Columbia concert artist became a favorite guest performer with symphonies across the country. She co-starred with Liberace and Jack Jones; played well-known cabaret nightspots such as the St. Regis and Pierre Hotels in New York, the Coconut Grove in Los Angeles, and the Colony and Society in London. She also performed concert engagements in Saudi Arabia, Tokyo, Hong Kong and Bangkok.

Throughout her career, McArt earned numerous honors, including multiple Carbonell Awards (the George Abbott Award in 1984, the Ruth Foreman Award in 2001), as well as  278 Carbonell Award nominations for her dinner theatre, and a Carbonell Best Actress Award for her performance in Nightclub Confidential. In fact, The Palm Beach Post named her “One of the 100 Most Influential People in Florida for This Century.”

She was a huge force in the development of South Florida Theatre for nearly 50 years, a true diva that will be deeply missed.