The Carbonell Awards fosters the artistic growth of professional theater in South Florida by celebrating the diversity of our theater artists, providing educational scholarships, and building audience appreciation and civic pride by highlighting achievements of our theater community. More than 25 professional theater companies in Broward, Miami-Dade, and Palm Beach counties participate in the awards process every year. Each season volunteer panelists and judges choose nominees and recipients from nearly 100 shows produced on our area stages. The Carbonell Awards also celebrate the accomplishments of our artistic leaders by presenting ‘Special Awards’ and support the next generation of artists and journalists by awarding scholarships. Along with New York’s Drama Desk and Chicago’s Joseph Jefferson Awards, the Carbonell Awards are among the nation’s senior regional arts awards and predate others, including Washington, D.C.’s Helen Hayes Awards. The Carbonell Awards are named after Manuel Carbonell, an internationally-renowned sculptor, who designed the original solid bronze and marble award in 1976, the signature trophy that is given to Carbonell Award winners.

Below is a complete list of this year’s Carbonell Award winners, followed by a breakdown of the awards by county, theater, and production. 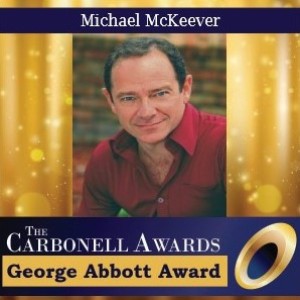 The prestigious George Abbott Award for Outstanding Achievement in the Arts, awarded to an individual (or team) who has contributed significantly to the artistic and cultural development of the region, was presented to Michael McKeever, playwright, actor, scenic designer, and co-founder of Zoetic Stage, a Miami-based theater company dedicated to developing new work and bringing different and exciting points of view to established plays. Since its inception, the company has won numerous honors and citations and has become a leading force in the region’s artistic landscape. McKeever has written 30 full-length plays that have been produced at theaters around the world. In addition to writing, McKeever teaches seminars in playwriting at several Florida colleges and universities. 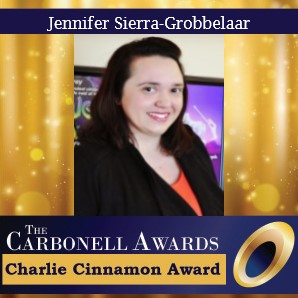 The Charlie Cinnamon Award honors an individual who not only contributes significantly to the support of the arts in South Florida but also for dedicated service to the Carbonell Awards organization, was awarded to Jennifer Sierra-Grobbelaar, Director of Marketing for Broward Center for the Performing Arts for her continued service to the Carbonell Awards In addition to her professional workload, Sierra-Grobbelaar has dedicated herself to volunteering for various arts organizations. She has been a Carbonell Awards panelist for about a decade, was an integral part of the organization’s PR committee for several years. Sierra-Grobbelaar worked with Charlie Cinnamon early in her career for almost ten years promoting theatrical productions for Broadway Across America. She has also served on the board of directors of the South Florida Theatre League, handled their social media for several years, and is currently part of the League’s advisory board 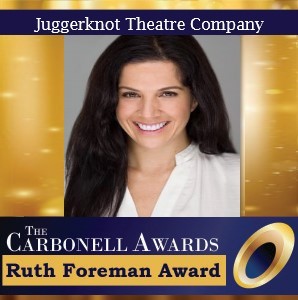 The Ruth Foreman Award, named in honor of pioneer theater director and producer Ruth Foreman, to recognize contributions to South Florida theater development by an individual or group, for singular achievement and/or career contributions, was awarded to Juggerknot Theatre Company in recognition of Miami Motel Stories, an innovative immersive theater experience which gives a fictionalized glimpse into Miami’s past. Juggerknot Theatre Company was founded in 1998 by Tanya Bravo, the company’s current executive artistic director. The company helped redefine the burgeoning theater scene emerging from Miami’s Urban Core, showcasing and developing works from local and national playwrights.