In November 2015, just a few days before his 95th birthday, South Florida lost one its legends, press agent Charlie Cinnamon. Cinnamon was an extraordinary presence in the performing arts, working right up until the end. In addition to his work as a press agent and his support of many arts organizations, Cinnamon dedicated years of service to the Carbonell Awards. To honor his unique legacy, the Carbonell Awards Board of Directors voted this year to institute the Charlie Cinnamon Award, to be given periodically to an individual who not only contributes significantly to the support of the arts in South Florida, but also for dedicated service to the Carbonell Awards organization. 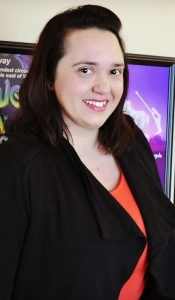 2019 – Jennifer Sierra-Grobbelaar currently serves as the Director of Marketing for Broward Center for the Performing Arts, Sierra-Grobbelaar spent 10 years as the marketing and media relations director for Cirque Dreams. In addition to her professional workload, Sierra-Grobbelaar has dedicated herself to volunteering for various arts organizations. She has been a Carbonell Awards panelist for about a decade, was an integral part of the organization’s PR committee for several years. With her friend and writing partner Matt May, Sierra-Grobbelaar is the co-creator and co-producer of Diego & Drew Say I Do, which held its world premiere at Broward Center for the Performing Arts in 2016 and received a Silver Palm Award for Outstanding Interactive Theatrical Experience. She has also served on the board of directors of the South Florida Theatre League, handled their social media for several years, and is currently part of the League’s advisory board. “It’s not often that I’m rendered speechless, but when Carbonell President Jody Leshinsky called me to share the news that I was selected to receive the Charlie Cinnamon Award, you could have knocked me over with a feather,” said Sierra-Grobbelaar. “I am truly surprised, grateful and humbled for the acknowledgment. I had the great privilege early in my career to be taken under the wing of Charlie Cinnamon and for nearly a decade, worked by his side promoting theatrical productions for Broadway Across America. Receiving an award in his name is an incredible honor. Charlie taught me so many invaluable works and life lessons and his stewardship has impacted my career in countless ways. Charlie’s contributions to the South Florida arts scene continues to make a lasting impact for so many. I hope that my efforts to shine a spotlight on organizations that foster enrichment through the arts can be considered a testament to his legacy.” 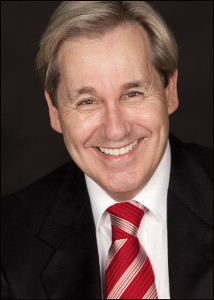 2018 – Tony Finstrom served the Carbonell Awards for nearly two decades.  His support of theater is boundless, from his aggregation and distribution of theater news, both local and national, to his enormous email list, to his financial support of many theaters.  Finstrom was a playwright whose full-length and short plays have been produced in South Florida.  Finstrom’s dedication to playwrights and new work was evidenced in his work with the Jan McArt Play Reading Series at Lynn University, which showcases new works by many esteemed playwrights, who have then seen those plays go on to full productions.  Finstrom was also the founder of the Silver Palm Awards, which in 2017 celebrated its 10th anniversary of honoring excellence in South Florida theater, with an award that has no set categories or competition, an award which has risen to a place of importance in South Florida. “My life is so much richer because of my involvement with the Carbonell Awards and our wonderful South Florida theater community,” said Finstrom.  “And for my minor contributions to this amazing regional theater scene, I couldn’t be more honored and pleased to receive a special award named for the great Miami publicist, Charlie Cinnamon, who I knew and loved.” 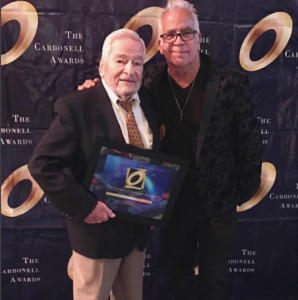 2017 – The inaugural Charlie Cinnamon Award was given to Jerome J. (Jerry) Cohen, a long-time patron of the arts and Carbonell Awards judge and board member. Unlike the other special awards, whose recipients are announced in advance, Cohen was surprised by the honor during the ceremony, presented by Richard Jay Alexander.